The Consul-General of Japan in Sydney's Newsletter - Past Issues

あけましておめでとうございます。I wish friends of the Australia-Japan relationship all the best for 2020.

Since I assumed the post of Consul-General of Japan in Sydney, the business topic attracting the most attention has been “Western Sydney Development”. There are extremely high expectations for the participation of Japanese companies, and I have been working with a wide range of stakeholders to realise the greatest possible use of Japanese technology and know-how. The first passenger flights from the new Western Sydney International Airport are planned for 2026, but if you consider the time required for all the necessary preparations, the year 2020 will be the key year. As I introduce recent developments, let us reflect upon the significance of Western Sydney Development and the possibilities it has for Japan. 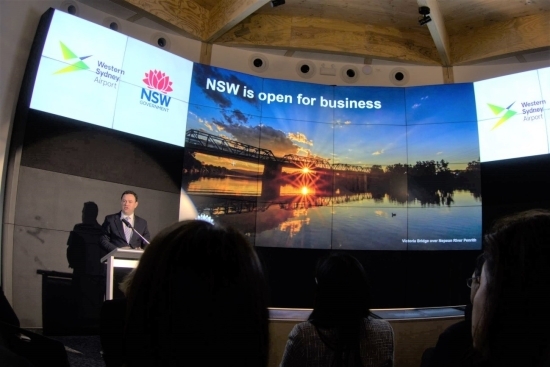 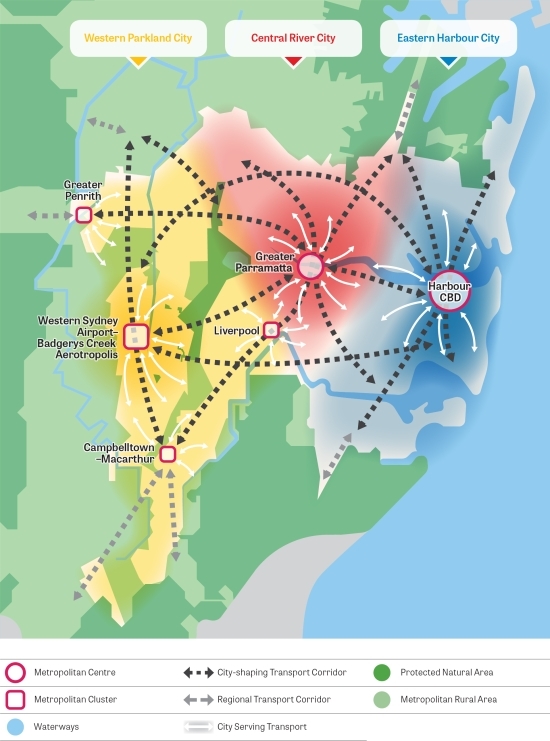 Today, 4.7 million people live in Greater Sydney. This is projected to reach 8 million in 40 years. In order to meet this growth in population and subsequent economic and structural changes, the ‘Vision of a Metropolis of Three Cities’ was created. Greater Sydney will be divided into three – ‘Western Parkland City’, ‘Central River City’ and ‘Eastern Harbour City’, and industry, employment and housing will be distributed accordingly. Aiming to achieve a ‘30-minute city’, investment in and innovation for the necessary economic and social infrastructure will be actively promoted.

The development of the Western Parkland City, which has the Western Sydney Airport and Aerotropolis as its core, will be the driving force to enable this vision to be realised. In March 2018, the Federal and NSW State Governments and the eight local governments in the area signed the Western Sydney City Deal. 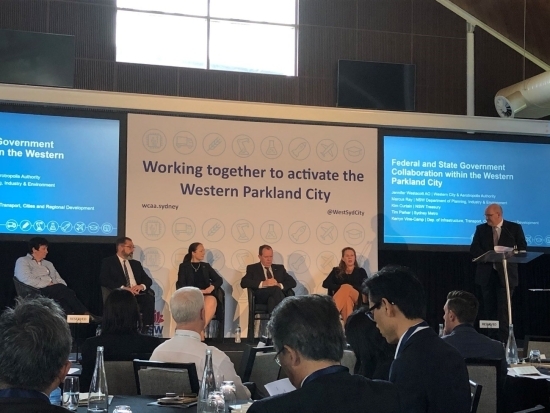 Following on from NSW Premier Gladys Berejiklian’s visit to Japan in August 2017, which introduced Western Sydney Development to Japanese businesses and organisations, in October and November 2018 the NSW Government signed four MoUs regarding Western Sydney Aerotropolis with Mitsubishi Heavy Industries Ltd, Sumitomo Mitsui Financial Group, Hitachi Ltd, and Urban Renaissance Agency. This can be seen as evidence of the trust in Japanese technology and know-how to deliver quality infrastructure, including transport and smart-city infrastructure. In conjunction with these developments, the NSW Government has established the Western City and Aerotropolis Authority (WCAA). It has also increased the number of MoU partners from 10 to 18 and is proceeding to take steps to realise plans.

Towards the end of 2019, a new stage was reached. On 6 December, the Western Sydney Aerotropolis Planning Package was announced and comments are being sought through to late February. On 16 December, the WCAA invited all 18 MoU partners to a symposium which had high-level Federal, State and Local Government representation. The WCAA’s strategy ‘Delivering the Western Parkland City’ and the latest project schedule were released at the symposium, and it was revealed that there would be public consultation on the major Western City Aerotropolis policy papers in late 2020. 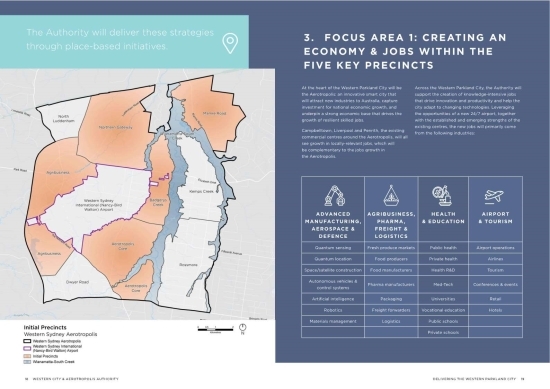 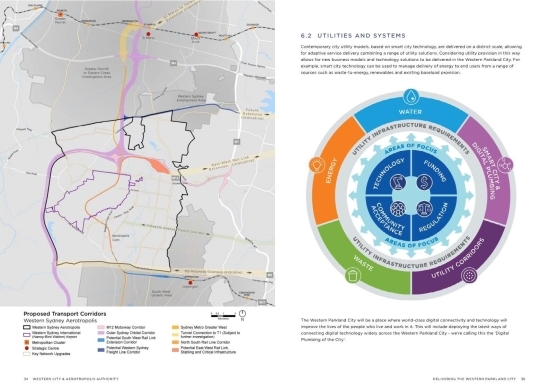 Furthermore, planning is underway for transportation systems and smart-city utilities – water, energy and waste management – that will support the 24-hour operation of the airport.

Having attended the WCAA Symposium on 16 December, I was able to gain an understanding of why expectations of Japan are so high in regards to the Western Sydney Development project. During Japan’s industrialization, Japan gradually developed urban centres while connecting the metropolitan areas and ‘bedtowns’ (outlying areas where commuters live) with public transport networks. For example, Minato Mirai in Yokohama City and Tsukuba Science City are successful models of urban planning that effectively connect the city centres with the purpose-designed industry hubs and their related employment. The efficiency of the public transport system and the thoroughness of waste management in Japan are unique. Energy and the adoption of ICT are world-class. In addition, in Japan, large companies, SMEs and start-ups all have their own strengths. 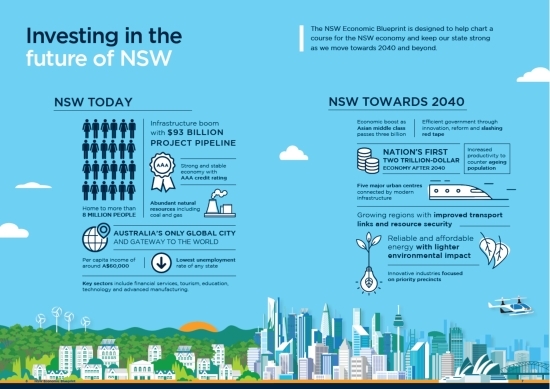 The NSW Government, which leads Western Sydney Development, released its mid- to long-term economic strategy for NSW on 20 November (“NSW 2040 Economic Blueprint”) and its global strategy followed on 4 December (“Global NSW Strategy”). Building on the state’s current prosperity, the economic strategy aims for continuous economic growth, fostering a competitive workforce, liveable cities, highly productive regions, leading and world-class businesses, environment and resource management, and efficient government. The global strategy is designed to support NSW’s economic strategy and develop Sydney and NSW as Australia’s global hub. To this end, the NSW Government announced it will assign top-level representatives to hub cities around the world – an Agent General in London, and Senior Commissioners in New York, Mumbai, Singapore, Shanghai and Tokyo. 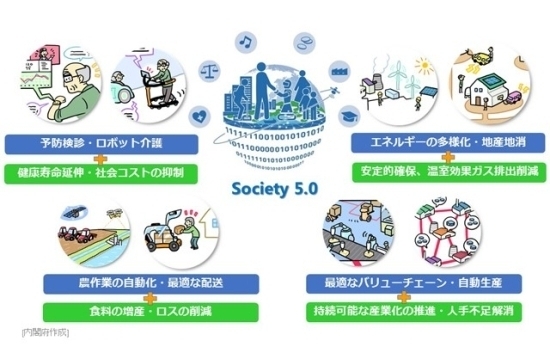 Today, as Japan faces the future, the Cabinet Office and Keidanren (Japan Business Federation) among others are using public-private partnerships to advance ‘Society 5.0 for Sustainable Development Goals (SDGs)’. Through the tight integration of cyberspace and physical space, Society 5.0 will create a human-centred society while achieving economic growth and solving key social problems. This is being fostered in wide-ranging areas – mobility, healthcare and caregiving, manufacturing, agriculture, food, disaster prevention and energy.

In Australia, the Federal, State and Local Governments are working together, committing significant resources to the Western Sydney Development, and they are after quality infrastructure. I believe that now is the time for Japan to contribute - actively from the planning stages onwards - in order that this concept of ‘Society 5.0’may be realised as part of Western Sydney Development.

Important economic events are already planned for early this year: in February 2020, the Japan Chamber of Commerce and Industry Economic Mission will visit Sydney, and in March, the Australia-Japan Infrastructure Networking Conference will be held here. Making the most of these opportunities, I would like to do all I can to encourage the participation of Japanese companies in Western Sydney Development and see Japanese technology and know-how utilised in Western Sydney Development. This could serve as a basis for expanding such development throughout the world.