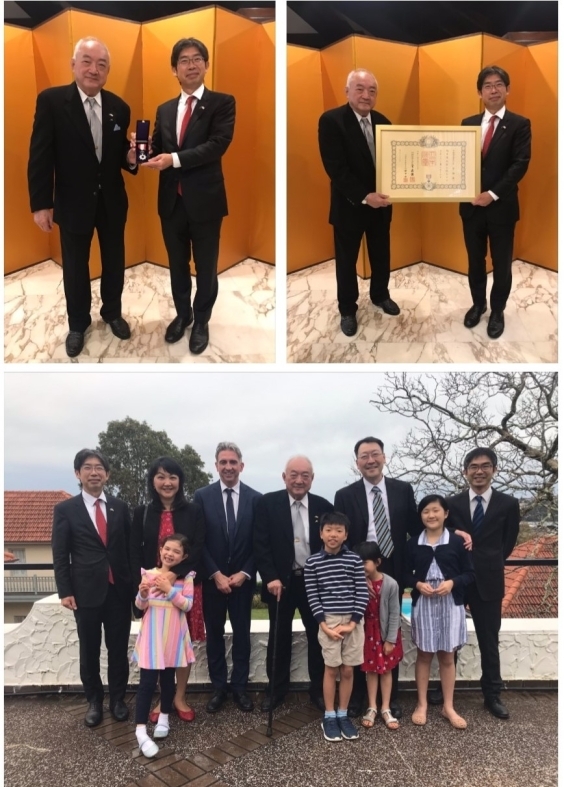 From 1988 on, Mr Tokura presided over the “Australia-Japan Cultural Exchange Association” and contributed to the promotion of friendship and goodwill between Japan and Australia. In 1989, he organised a memorial service in the city of Cowra for the Australia and Japanese victims of the war. He also constructed an “Avenue of Cherry Trees (Sakura Avenue)” in Cowra and has made ongoing and significant contributions to Cowra’s “Cherry Blossom Festival (Sakura Matsuri)”. 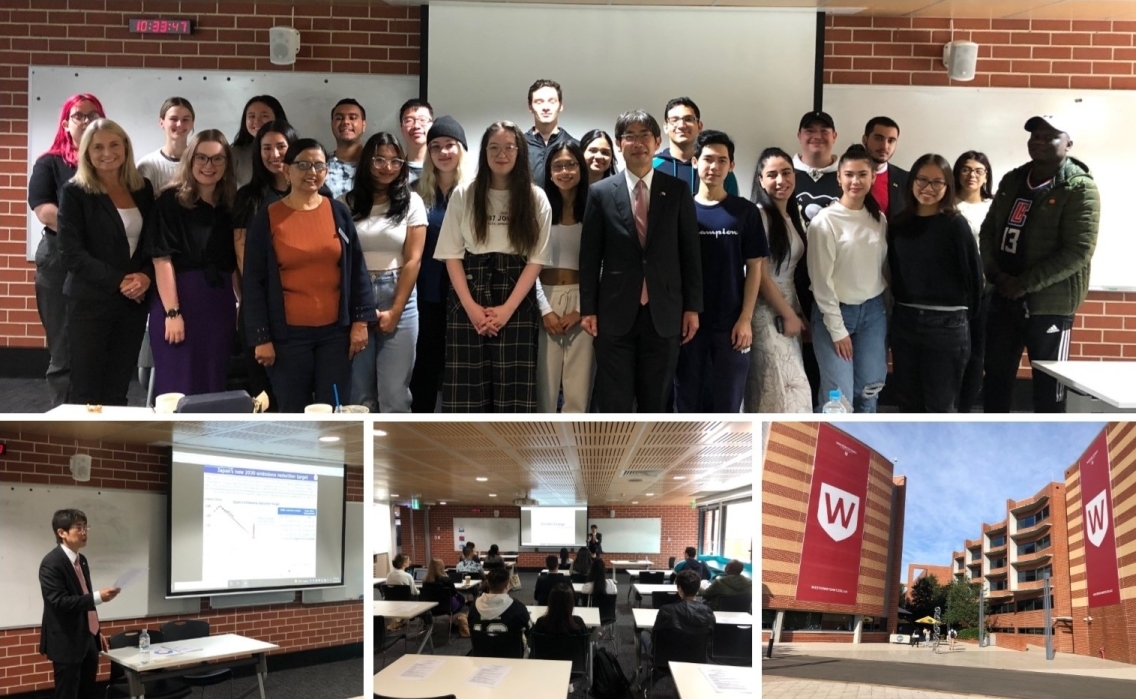 On 19 April, Consul-General Kiya visited Western Sydney University again to give a lecture on climate change and Japan-Australia cooperation as part of a WSU program on Australia-Asia relations. 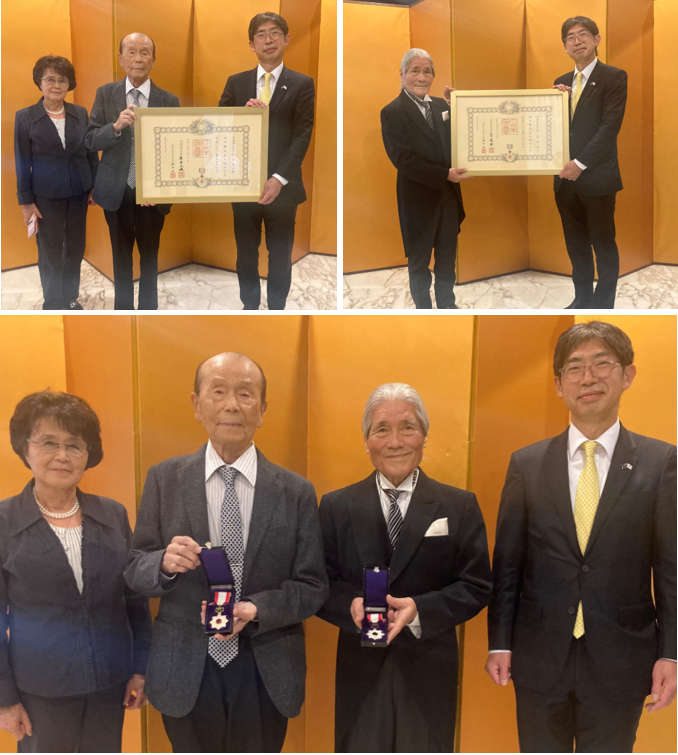 On 6 April, Consul-General Kiya hosted the Imperial Decoration Conferment Ceremony in honour of Mr Dekura Hideo and Mr Funayama Seijiro who received the Order of the Rising Sun, Gold and Silver Rays respectively. On 25 March, Consul-General Kiya Masahiko attended the NSW Japanese Teachers' Conference. In his speech, he thanked the teachers for their contribution to Japan-Australia mutual understanding and friendship. More than 160 Japanese language teachers attended the conference in Parramatta.

On 2 March, the National Day Reception was held at the official residence of the Consul-General of Japan in Sydney, Mr Kiya Masahiko, to celebrate the Birthday of His Majesty the Emperor of Japan. Despite the severe weather, the event was attended by dignitaries from various fields including the NSW Government.

The official proceedings began with the singing of the national anthems by Ms Kato Hisae, a resident of Sydney and coordinator of Voice Collage, who produced a choral video by Japanese residents in Australia for Japanaroo.

In his welcome remarks, Consul-General Kiya spoke about many aspects of Japan and Australia's close ties including politics, security, business, sports and people-to-people exchange. Her Excellency the Honourable Margaret Beazley AC QC, Governor of NSW, also spoke, extending birthday greetings to Emperor Naruhito and reflecting on the friendship between Japan and NSW. The Governor participated in the kagami-biraki ceremony, the traditional breaking open of a sake barrel.

An additional element on this occasion was the conferment ceremony of the Imperial Decoration (Autumn 2021) for the Honourable John Ajaka, former President of the NSW Legislative Council. Mr Ajaka received the Order of the Rising Sun, Gold Rays with Rosette in recognition of his contribution to the promotion of bilateral ties and friendship between Japan and Australia.

Food served at the reception included sushi made with rice grown in Japan and canapés made using regional ingredients from around Japan. Sake was also served. In addition, there were displays arranged by Japanese organisations which introduced products and services as well as Japan-NSW sister cities. Taikoz gave a performance of Japanese drumming. Conversation flowed and it all made for a very lively evening.

The Consulate would like to thank the following organisations for their contributions: 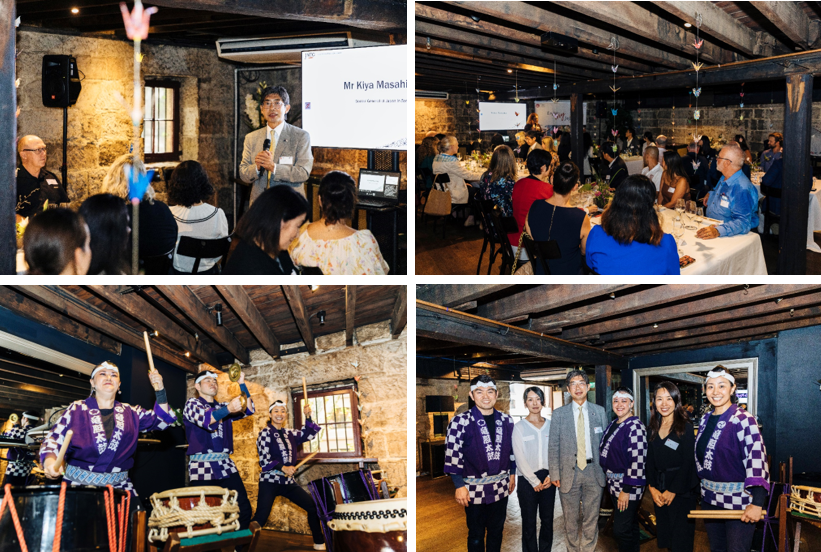 In his remarks, Mr Kiya said he hoped that knowledge gained at the event would help them to offer Australians even higher quality tours and packages in Japan once borders reopen for Australian travelers. 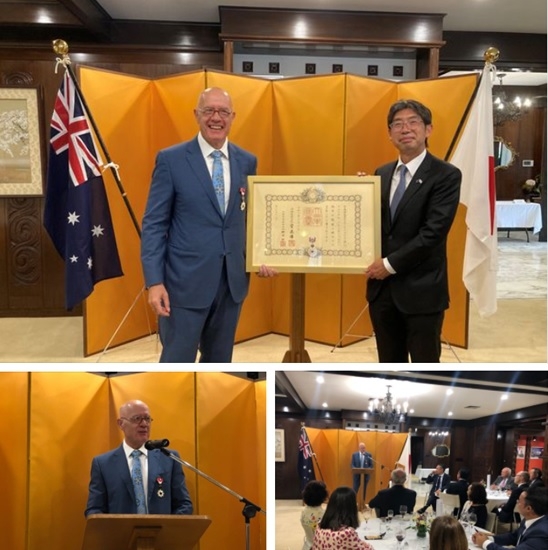 On 22 February, Consul-General Kiya hosted the Imperial Decoration Conferment Ceremony in honour of Mr Manuel Panagiotopoulos who received the Order of the Rising Sun, Gold Rays with Rosette, in recognition of his great contribution to the promotion of Japan-Australia business relations and mutual understanding.

The Consul-General read a message from Ambassador Yamagami and added his own words of appreciation for his contribution to the development of mutual understanding between Japanese and Australian business communities.

The celebratory dinner that followed the ceremony was held in the style of the Australia-Japan Roundtable which Mr Panagiotopoulos created. The Roundtables have provided invaluable networking opportunities.

Following on from last month's visit, Consul-General Kiya visited Darwin from 16 to 20 February to participate in a series of important events including the 80th anniversary - Bombing of Darwin Commemorative Service on 19 February.

Among other events, on 18 February, the Consul-General attended the Unveiling Ceremony of the new I-124 Memorial listing the names of all 80 crew members who perished when the I-124 submarine was sunk off the coast of Darwin. At the subsequent reception, hosted by HE Ambassador Yamagami Shingo, Mr Kiya gave the closing remarks.

In the afternoon of 19 February, the Consul-General Kiya hosted Consul-General's Commendation Ceremony in honour of Darwin Memorial Uniting Church, which has played a significant part in reconciliation between Japan and Darwin since its inception. The commendation ceremony and reception took place in Fujita Hall at the church. 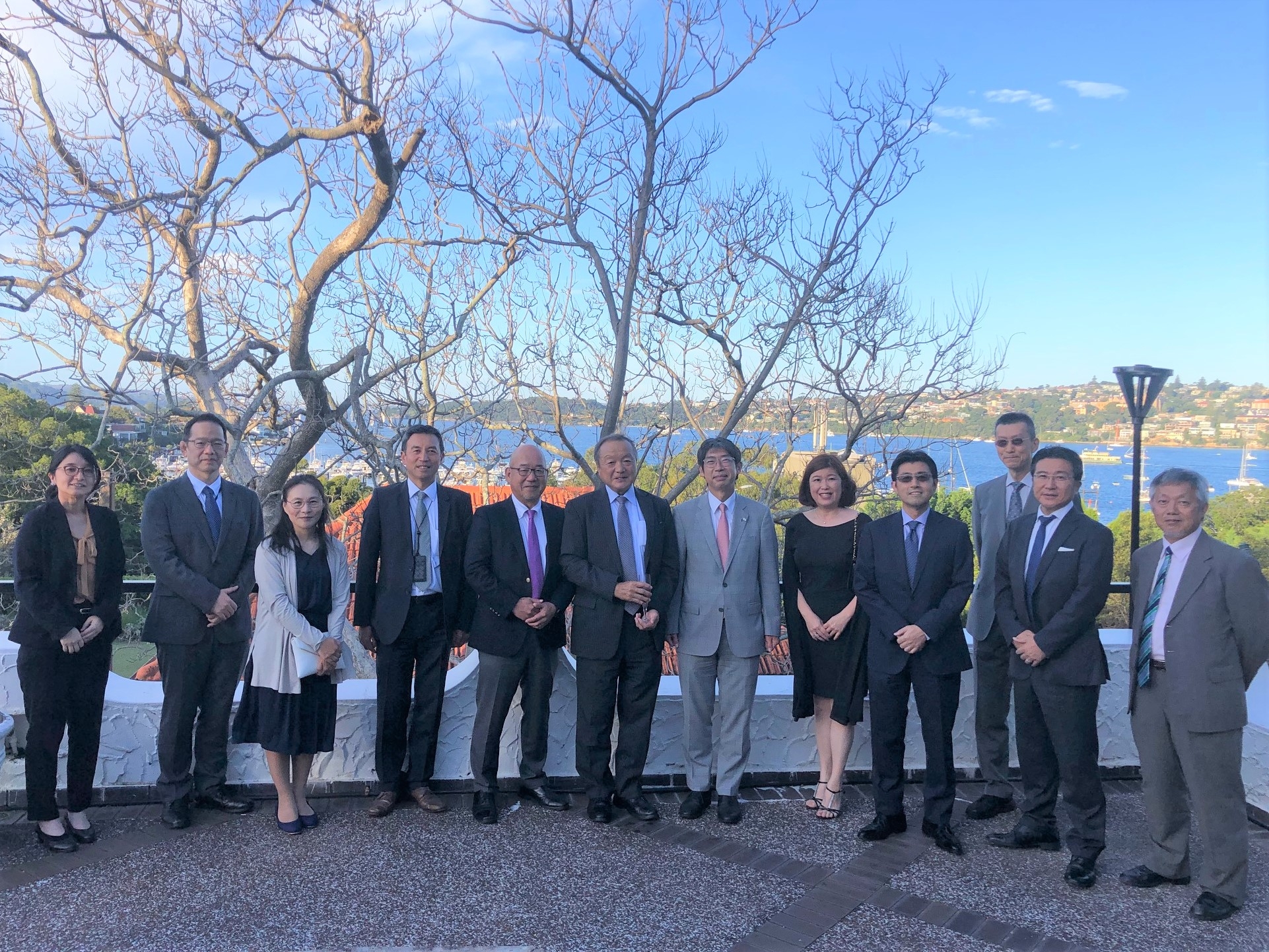 On 9 February, Consul-General Kiya invited representatives from Japanese Society of Sydney Inc., Japan Club of Sydney, and the Japan Chamber of Commerce and Industry, Sydney Inc. at his official residence and exchanged views.

Visit to the Hunter Region 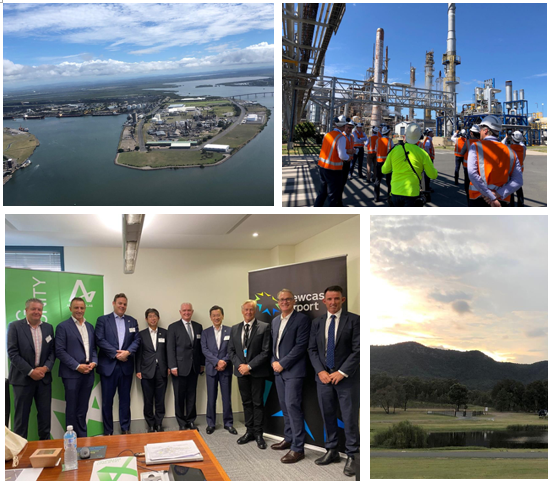 From 31 January to 1 February, Ambassador Yamagami and Consul-General Kiya visited the Hunter region. During the visit, they attended meetings including a discussion with companies based in the region, joined a tour of Newcastle port, as well as a briefing session on the development of hydrogen in the Hunter.

For further details about the visit, please see Consul-General of Japan in Sydney Newsletter No.56 Visit to the Hunter Region.

Reference link: Consul-General of Japan in Sydney Newsletter No.56 Visit to the Hunter Region (10 February 2022) 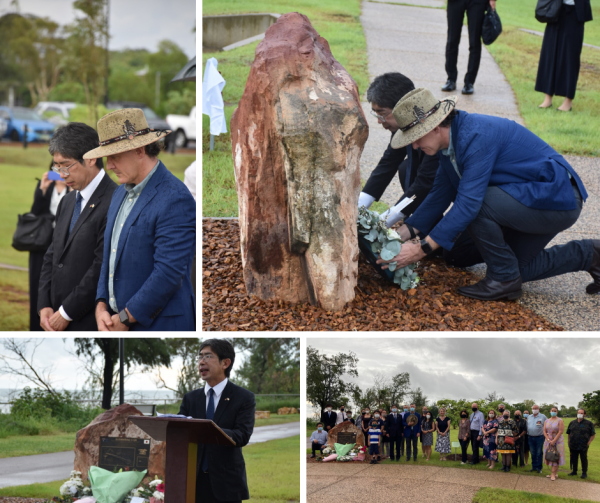 On 20 January, Consul-General Kiya attended and gave a speech at the 80th anniversary Memorial Service for the 80 crew members of the Japanese I-124 submarine. The Northern Territory Chief Minister Michael Gunner also attended. 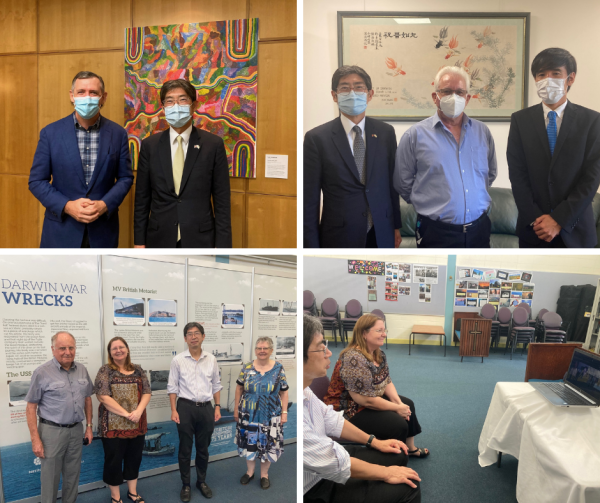 The day before the service (19 January), Consul-General Kiya met with Chief Minister Gunner and discussed further collaboration between Japan and the NT.

On 21 January, the Consul-General met with the Lord Mayor of Darwin, the Hon. Kon Vatskalis again. He was joined by the Director of CLAIR Sydney, Mr Akaiwa Hirotomo, and they discussed Darwin’s cooperation with Japan and future city exchanges.

Reference link:Consul-General of Japan in Sydney Newsletter No. 55 Memorial Service for I-124 Crew Members (28 January 2022)