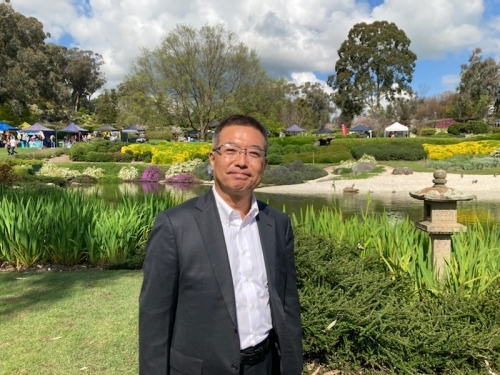 My name is TOKUDA Shuichi. From today, 23 September, I assume the post of the Consul-General of Japan in Sydney. I hope to have the pleasure of working with many of you during my time here.

The Japan-Australia relationship has attained the status of a “Special Strategic Partnership”, which is based on common values and strategic interests. Our economic and trade relationship, founded on longstanding people-to-people exchange, is expanding, and in recent years, cooperation and collaboration in the field of security have made significant progress. It is thanks to the efforts of many people across diverse fields that our mutual ties have developed and built up as they have. As the Consul-General of Japan in Sydney, I will firmly grasp this baton that has been passed on to me and do my utmost to further strengthen Japan’s excellent relationship with Australia, particularly with the state of New South Wales and with the Northern Territory which falls under this consulate’s jurisdiction.

Prior to Sydney, I was posted to Moscow three times and to London once, and I continued to work above the 50th parallel north. Most recently, I held the position of Deputy Assistant Minister and Deputy Director-General of the European Affairs Bureau, Ministry of Foreign Affairs (MOFA) of Japan in Tokyo. During the first half of this year, I was deeply involved in responding to the situation surrounding Ukraine and Russia. This is my first time to work in the southern hemisphere. I am delighted and honoured to have been posted to Sydney, and I look forward to meeting new people here.

Being my first time to work in Australia, after I received notice of my posting, I began reading various books, starting with Prof. Takeda Isami’s “Australia’s History – A Story” (物語 オーストラリアの歴史 (Monogatari Ōsutoraria no Rekishi)). I also met with my predecessors and visited many individuals, companies, organisations and groups involved in Japan-Australia relations. Through my discussions with them, I became aware of just how much Japan and Australia have in common – from shared basic values such as freedom, democracy and the rule of law to economic and security ties – and I realised there are so many areas in which we can cooperate. Furthermore, I understood that it is natural for our two countries to work together, that the attitude of people currently involved in Japan-Australia relations is positive and forward-looking, and that possibilities for future cooperation are manifold. In particular, there is potential for Japan and Australia to cooperate to realise a Free and Open Indo-Pacific.

Despite the difficulties caused by COVID-19, exchange and two-way travel between Japan and Sydney is recovering. There are now daily direct flights between Tokyo and Sydney. In July, NSW Premier Dominic Perrottet and NT Chief Minister Natasha Fyles visited Japan, and in the same month, from Japan, Minister of Economy, Trade and Industry Hagiuda Koichi and Minister of Internal Affairs and Communications Kaneko Yasushi visited Sydney one after the other. A further recovery is expected in the number of reciprocal visits in the executive branches of government, between parliaments, in the business world, and in the fields of culture, academia and the arts. It is in this context that I will actively work as Consul-General to support and assist representatives of Japanese companies located in Sydney, NSW and the NT. Proposals and ideas are always welcome, so please do not hesitate to get in touch. At times, I may well reach out to stakeholders. I hope that my experience and my knowledge of public-private partnerships gained working at MOFA’s International Cooperation Bureau and on secondment to the Ministry of Finance will prove useful.

Of the approximately 100,000 Japanese nationals living in Australia, more than 30,000 live in NSW and the NT. The main duty of a consulate-general is maintaining the safety and well-being of Japanese nationals. I will be sure to take on this responsibility and implement efficient and useful consular services.

The Consulate also has an important role to consolidate, preserve and strengthen connections between our two countries on a daily basis through various types of exchange and events, such as sister-city exchange, introducing Japanese culture, promoting Japanese language and sports exchange, as well as to promote and maintain the presence of Japan in Australia. I have heard that many people are already cooperating in this area, and I would like to take this opportunity to express my sincere gratitude to them. I will do my best to promote a vibrant Japan to the people of NSW and the NT.

I look forward to working together with everyone – both Japanese nationals living here and representatives of government agencies, companies and organisations in NSW and the NT – to further develop the excellent relationship between Japan and Australia.